M.A. Program in Biography and Memoir 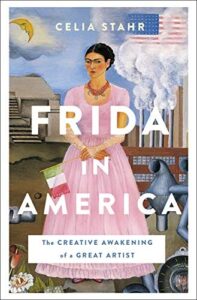 Fresh out of college in 1977, I traveled to Mexico City and met up with a filmmaker. She had errands to run, so to occupy myself and a doctor friend, she dropped us off outside an old house with an enormous patio. “Go in; it’s interesting,” she said. “I’ll pick you up in an hour.”

Roaming the building, we saw paintings, dust-speckled furniture and horned paper-mâché figures. We were the only ones there, as far as we could tell. The artwork lacked explanatory labels, leaving us ignorant of the creator’s background. When the filmmaker came for us, her doctor friend and my fellow viewer said, “I don’t know about you art lovers, but I can tell you that the woman (the artist) was in a lot of pain.”

Without knowing it, we had visited the Frida Kahlo Museum. At the time, the artist was largely unknown. Today, however, that venue ranks as a leading local tourist attraction, drawing about 600,000 people a year, many of them from abroad. “(Kahlo) transformed her pain into art,” the museum’s director has said. The artist suffered from congenital ailments, polio and a bone-shattering bus crash and underwent an estimated 32 surgeries in her lifetime.  Her philandering husband, muralist Diego Rivera, also hurt her emotionally.

The detonator for the international explosion in Kahlo interest was the 1983 publication of Frida: A Biography of Frida Kahlo, the first English-language account of her life. The 507-page tome has been unequaled since in its scope and extensive documentation. In her research, the author, Hayden Herrera, amassed recollections of more than 70 contemporaries of Kahlo which she contacted.

In recent decades, hopes have faded for new and substantive memories of the artist by friends, acquaintances, and associates, who had spent lengthy times at her side. The artist herself died in 1954, and nearly all those who knew her have passed away.

However, a new book, Frida in America: The Creative Awakening of a Great Artist, by Celia Stahr brings to light, with expanded reach, the journal of Kahlo confidant Lucienne Bloch. Herrera drew on Bloch’s diary written when she lived with Kahlo and Rivera in Detroit. Stahr draws on not only the Detroit journal entries but also Bloch’s diary in New York and Mexico when she was in close proximity to Kahlo.

The Swiss-born Bloch, the daughter of the famed composer Ernest Bloch, was a sculptor and painter who turned down a job offer from Frank Lloyd Wright to become an assistant to Rivera. She saw Kahlo in unguarded and vulnerable moments. One of them was when the Mexican artist’s mother died.  Another was Kahlo’s miscarriage, followed by two months of vaginal bleeding.

Stahr also mines Kahlo’s correspondence with her mother, father, sisters, and a cousin during the artist’s U.S. sojourn between 1930 and 1933, when she followed Rivera to San Francisco, Detroit and New York for his mural projects. To my knowledge these letters — held by the National Museum of Women in the Arts in Washington — are more extensively cited in Frida in America than in any other English-language book.  A 2016 Spanish-language book, Tu Hija Frida: Cartas a mamá, compiled by Héctor Jaimes, replicates Kahlo’s letters, in facsimile and printed text, to her mother during this period. But it does not include correspondence from any other relatives with Kahlo.

Drawing on the Bloch journal and the correspondence, Stahr trains a spotlight on Kahlo’s mindset, using it to illuminate her struggle to forge an independent and unique artistic profile in the shadow of the widely famous Rivera. At the start of the early 1930s, Kahlo hewed to single-subject paintings, displaying little innovation. By the time she prepared to return to live in Mexico three years later, she had produced a number of her most noteworthy multiple-object paintings, projecting her agony or commenting subtly on cultural and political themes.

The core of Frida in America begins with Kahlo’s arrival with Rivera in San Francisco in November 1930. A 23-year old newlywed, she was already under stress from enduring two of Rivera’s affairs. But also weighing on her mind were the financial straits of her parents. Her work focused on portraits, which she hoped to sell, to help her mother and father, thus obviating the need to ask Rivera for money to send home. She is elated when one painting is bought for $300. In this regard, Jaimes’ book provides a fuller picture of her familial concern than Stahr’s.

Given her commercially minded interests in San Francisco, Frida was initially little prone to experimentation, except with backgrounds and beribboned painting captions. But she leapt into surrealist-tinged territory after an absorbing tour of the home and gardens of Luther Burbank, a crossbreeding plant geneticist. As Stahr observes: “The grounds were magical, the trees bursting forth with many unusual fruits including the plumcot – part Japanese plum, with its soft flesh, and part California apricot, with its distinctive scent.”

The product of the visit is her 1931 painting “Portrait of Luther Burbank,” where he is portrayed as a hybrid half-man, half-tree.  Wearing a suit, Burbank stands erect. But, as Stahr observes, “From the knees down, he has sprouted from a tree trunk that ends with many roots growing into the skeletal remains of a body.”

In Stahr’s retelling, Kahlo’s pivotal transformation followed in Detroit, where she moved with Rivera in March 1932. The creative trigger was a miscarriage, which landed her in a hospital bed for nearly two weeks. She portrayed her pain in the 1932 painting “Henry Ford Hospital.” Attached to her swollen body are umbilical-like cords tied to floating objects like a sink, snail, pelvis, and fetus. “With this new, emotionally raw, and taboo subject of a miscarriage and its complex associations, twenty-five-year-old Frida freed herself from conventionality, becoming an independent woman and original artist,” Stahr writes. Italicizing the end of a paragraph for emphasis, the author states that, “If the bus accident at age eighteen had given Frida time, the first ingredient an artist needs to create, then this second major trauma of her life bestowed upon her the second ingredient a great artist needs —  a fearless spirit that isn’t afraid to chart the unknown.”

Nearly two months after the miscarriage, Kahlo asked Bloch to join her on a long train trip home on fears that the Mexican artist’s mother was on her death bed. They arrived just before the mother passed away. With fresh eyes, Bloch observed Mexico for the first time, which in the 1930s had a much wider economic and cultural gulf with the United States than today. Her descriptions provide fitting context for Kahlo’s landmark 1932 work, “Self-Portrait on the Borderline Between Mexico and the United States.”

In Detroit, Bloch and Kahlo set up their own studio, studied lithography and explored androgyny in jointly created pencil-on-paper works. One Bloch-Kahlo drawing, for example, is of a female body with the head of Rivera. Another figure, labeled Diego Rivera, features Kahlo’s joined eyebrows and a bustier pointing breasts upwards. A fig leaf in the groin area fails to cover a penis, which oozes droplets that fall into a chamber pot.

Later in New York, still working as an assistant to Rivera, Bloch witnessed the tumult of the shuttering of his mural at Rockefeller Center and the little-known 21-panel work at a rickety building on 14th Street that followed. She also observed Kahlo’s heated fights with Rivera.

Stahr tracks Kahlo’s journeys to neighborhoods in Manhattan like Chinatown and Harlem and quotes her letters about the enormous divide between rich and poor. She and Rivera visited a homeless shelter and the Hooverville shanties of Central Park which housed impoverished residents.

This is a prelude to one of her more commented-upon works. The 1933 painting, “My Dress Hangs There,” seems to question if the United States is living up to its ideals during the Great Depression. In the work, she reproduces images, including a billboard of Mae West and the Wall Street landmarks of Federal Hall and Trinity Church. A multitude of men congregate in what appears to be a breadline, below a toilet borne aloft by a Doric column. Disembodied feet poke out from a trash can. The Manhattan skyline recedes in the background and another island tapers back to the Statue of Liberty. In the foreground is a Mexican Indian dress, typical of communities on the Isthmus of Tehuantepec, where women have long been assertive.

Stahr appropriately embeds this description of the painting in a chapter titled “Emboldened Frida,” which depicts the artist on the eve of returning to live in Mexico. At 26, she has confidently made great strides in creating an inimitable style.

In summary, Stahr’s narrative is strongest when supported by Kahlo’s letters and her 191 citations from Bloch’s diary.

I quibble with the book’s translation of the Mexican idiomatic term “viejas.”  Colloquially, it refers to adult women of any age. Here it is translated as “old bags,” casting a nastier tone to Kahlo’s description in a letter of female socialites. The most literal translation of “viejas” is old women. But at least in Mexico, even in a formal linguistic register, that term is shunned for elderly females.

The book could also have benefited from stronger copy-editing. It states that the Mexican revolutionary peasant leader Emiliano Zapata conquered the city of Cuatl when the name of the locality is Cuatla.  In addition, facts can be repeated in close proximity. For example, on one page we are told a doctor has German immigrant parents, and on the next the same person is identified as the child of German immigrants.

These slight slips aside, the book should serve as a landmark reference for Kahlo scholars, after unveiling rich veins of new information. Stahr’s zooming in on a critical U.S. period in Kahlo’s life shows her flowering into an unforgettable artist, with the fresh perspective that came from living abroad, away from the traditional cultural strictures on Mexican middle-class women in the first half of the 20th Century.

This entry is licensed under a Creative Commons Attribution-NonCommercial-ShareAlike 4.0 International license.

Images are for demo purposes only and are properties of their respective owners.
Old Paper by ThunderThemes.net

Need help with the Commons? Visit our
help page
Send us a message
Skip to toolbar

Built with WordPress Protected by Akismet Powered by CUNY